Delegate Aims to Rein in 'Predatory Loans,' to No Avail
Washington Post

Republican senator lectures Del. Mark Levine over 'civilities of the chamber' after email about guns and GOP
Richmond Times Dispatch 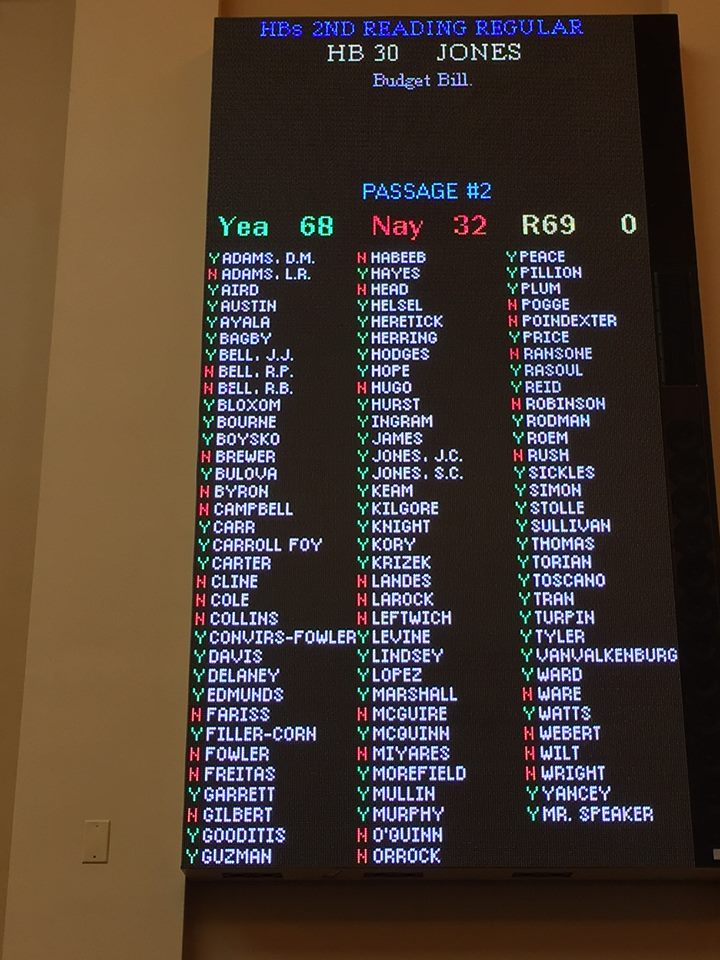 On Thursday, for the first time in Virginia history, a strong, bipartisan majority comprising more than 2/3 of the House of Delegates passed a Virginia budget including Medicaid Expansion. I was proud to cast my vote in support of it, along with every one of my 48 Democratic colleagues.

This budget will finally enable low-income people to take advantage of the billions of dollars the Federal Government has collected from Virginians for years under the Affordable Care Act but previously sent to other states due to the failure of the majority to accept Medicaid Expansion. This year, it's $421 million.

The Senate majority at this point still refuses to accept Medicaid Expansion on a party-line vote of 21-19, but if we can convince just one Senator to cross party lines, we can use this $421 million to give 300,000 to 400,000 Virginians affordable access to health care.

Virginia Democrats and Republicans have been disagreeing over Medicaid Expansion since the Affordable Care Act was first enacted in 2010. Medicaid Expansion was cited by voters as the single most important issue in Virginia's 2017 elections. Democrats had a blow-out victory, and as one Republican said on the Floor, "elections have consequences." Reality has consequences, too. And the reality is that in large poverty-stricken pockets of Virginia, particularly in rural areas in the South and the Southwest, this access to health care insurance is the difference between life and death. I applaud the 19 Republicans who joined all 49 Democrats in putting the vital needs of their constituents ahead of political rhetoric.

I also applaud so many of you. I know thousands of Virginians, including many residents of Virginia's 45th district, worked day in and day out in supporting House candidates all across the Commonwealth who championed Medicaid Expansion.

Your hard work is paying off, but the fight isn’t over yet. The budget that passed the Senate this week still does not include Medicaid Expansion. Conferees from both chambers will have to negotiate the differences between their budgets to produce a result that we can all vote on. I'm increasingly optimistic that at least one Senate Republican will eventually support Medicaid Expansion and finally bring this desperately needed care to so many Virginians. But as this will be a major disagreement among budget conferees, I urge you to keep the pressure up. I join a large majority of colleagues in my commitment to making sure the final budget includes Medicaid Expansion. And I commit to you that I will not support any budget this year that does not include it.

The 2018 budget also included an increase in K-12 funding of $98 million over the next two years and a much-needed 2% pay raise for state employees. Few things are more important than our children’s education, and I was happy to vote to make sure that we get higher pay for our teachers and more resources for our schools. I’ll be watching closely to see that these pay raises are not stripped from the budget.

Although I have tremendous praise for the budget, I do have to point out that the Republicans in the House of Delegates still refuse to prohibit discrimination in the hiring of state employees. I stood up to speak in favor of Delegate Simon's budget amendment to make clear that race, color, religion, national origin, sexual orientation, gender identity, and other arbitrary characteristics should not determine who gets state employment. No one spoke against the Amendment, but it was still "passed by" (defeated) on party lines. (Budget time is a confusing process. In this case, a yes vote meant you wanted to allow arbitrary discrimination and a no vote meant you wanted to disallow such discrimination. Given the confusion, one Democrat mistakenly voted yes to defeat the amendment but has since changed his vote. So the final tally was a pure party-line 51-49.) 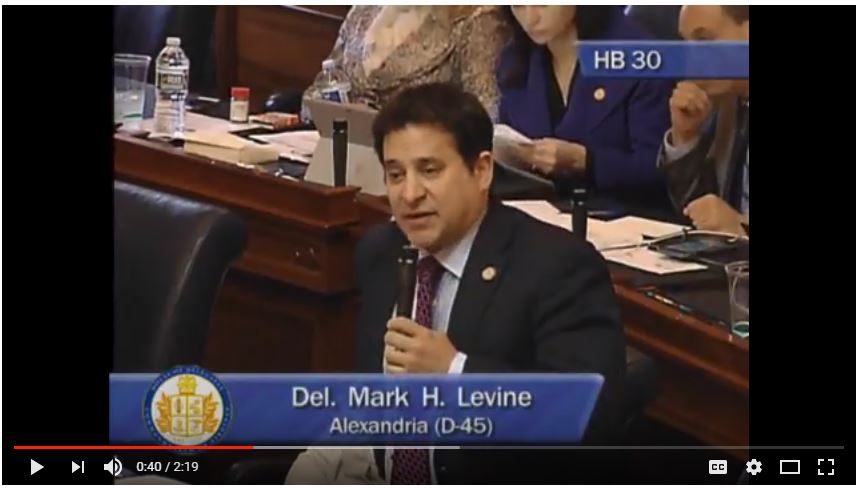 While Virginia has meager regulations in place for payday and title lenders, it has little regulation for "open-end" credit lenders who make predatory loans for struggling Virginians at an unlimited interest rate. Both my staff and I have personally received notices from an out-of-state company that promised to loan us $1000 today but required us to pay it back at an interest rate of 299% buried deep in the fine print that does not even mention the additional 15% fee. As the company compounds daily at this interest rate, this loan would cost anyone desperate enough to accept this offer more than $20,000 in interest and fees if they were to try to pay the $1,000 loan back in full just one year after receiving it. (In two years without prepayment, the interest cost would rise to a staggering $400,000.) 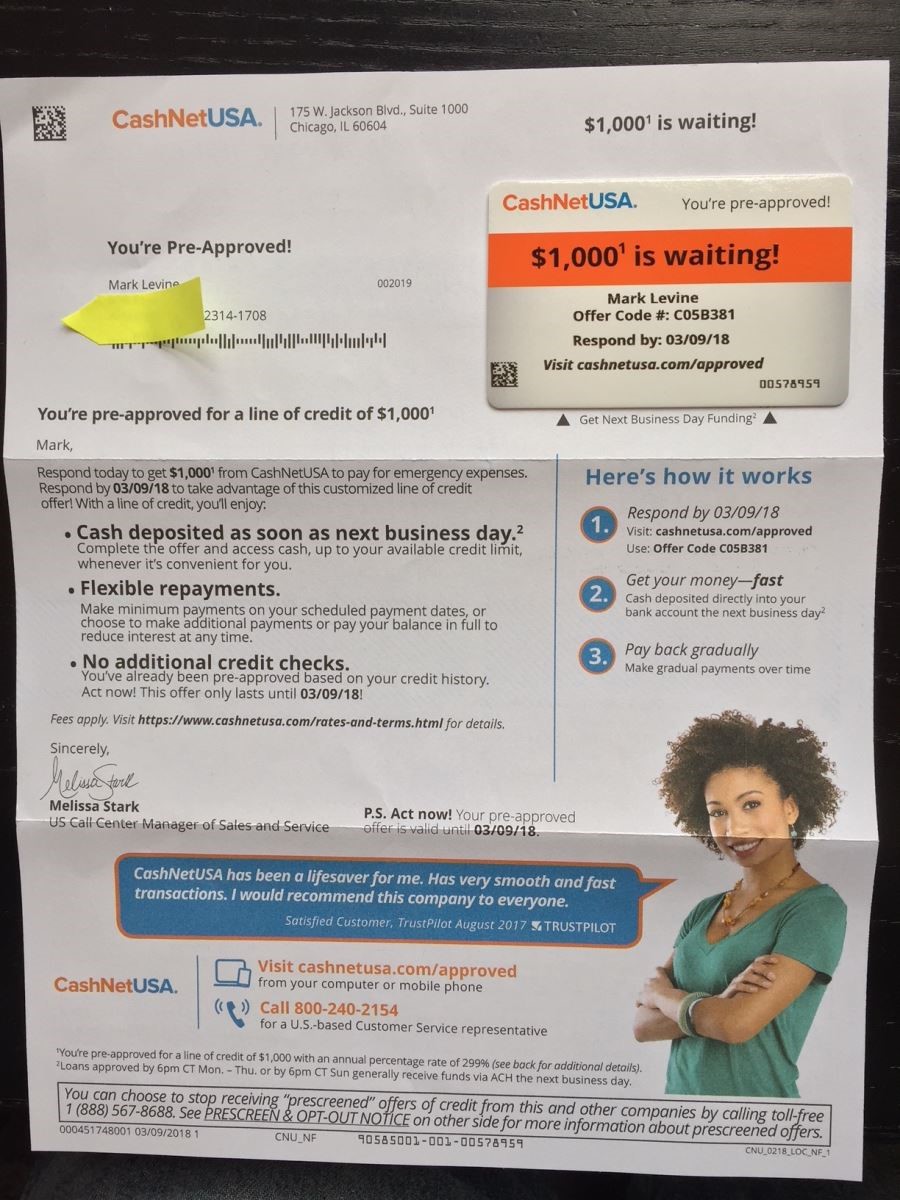 There are legitimate businesses in Virginia that charge a quite hefty rate of 36%, which, though very high, is at least low enough to allow many debtors to repay it. But some unscrupulous out-of-state lenders, like the one I show above, have policies that ensure that once you take a loan from them, you will likely be on the hook for all your income to them for the rest of your life (until you finally declare bankruptcy). There’s a good write-up of our effort in the Washington Post, which I highly recommend.

Should I Tone Down Rhetoric on Guns?

If you've read the Richmond Times Dispatch article published yesterday or the commentary on Blue Virginia below it (see column left), you know that Virginia Republicans were angered by the email I sent out to you last week after the murder of the 17 schoolchildren in Parkland, Florida. That email criticized the failure of Republicans in Congress to act and in Virginia to allow out of subcommittee legislation like universal background checks, which I believe would help keep very dangerous people from having easy access to AR-15s, the weapon used to murder the 17 teenagers in Florida and used with increasing frequency by mass murderers all across the USA.

Universal background checks, according to a nationwide poll taken this week, are supported by a staggering 97% of Americans and opposed by a tiny 2%. 97% of gun owners also support these background checks. The poll's margin of error was 3.4%. I firmly believe it's time the Virginia General Assembly allow the issue to come to the Floor for a vote.

No doubt I used strong language in the prior email. You may recall I even posted a parental advisory for it. But I'm angry too. I'm angry that we in the Virginia General Assembly are doing very little to stop gun violence. while innocent Americans are being massacred more and more often. Hundreds of you have written me to support my efforts at common-sense gun regulation, and many of you have told me how fearful you are just to send your kids to school. I've heard how the Parkland attacks triggered post-traumatic stress and how many of you in libraries and restaurants are looking for the closest exit in case a gunman arrives.

I do not believe we should live in fear. I do believe in working across the aisle to address common-sense gun regulation. And I sincerely hope that one day, Republicans will agree to sit down and work with me on these issues. I've tried for three years now, in public and private, and I will continue to try to work with them.  But so far, all I've met -- at least from Republicans in the House of Delegates -- is a brick wall. And the email I sent last week expressed my frustration at Republican policies that keep it legal for very dangerous people to have easy access to very dangerous weapons. The email was not attacking any particular member of the Virginia General Assembly. It wasn't personal. I like many of my Republican colleagues. But I strongly and sincerely believe they are wrong-headed to ignore the cries of Virginians and the 97% of Americans who support universal background checks, which studies have shown to greatly reduce murder and suicide rates. [1] [2] [3] [4]

Senate Republicans have announced publicly that, due to my strong words in that email to you against their gun policies which they say is "uncivil", they will flip their votes on my two pending unrelated bills, the first bill (HB136) to allow Gadsby's Tavern an annual liquor license and the second bill (HB424) to allow animal shelters to vaccinate their animals to protect against communicable diseases. They concede the bills are good bills, that there is no opposition to them, and that they strongly support both pieces of legislation. But they want to "punish" me for speaking out so strongly against their gun policies. They have insisted I apologize. After passing the first bill 40-0, they reconsidered it and defeated it. And now they are threatening to reject the second bill they originally passed 39-1. They are passing it by for the day every day.

Thus far, every single one of the dozens of emails I've received on this issue has been supportive, and no one has asked me to stand down. But perhaps you want to tell me something different or in person. Let's have a full discussion on this tomorrow. I will always be as transparent and as accessible to you, my bosses, as I can possibly be. And if you believe I've overstepped the bounds of civility, I want to hear it from you directly.

And if you miss February, there's always March, April, or May. Every month, I make sure to be available in this informal setting for any constituent who wishes to discuss a problem or just say hello.

Please also consider joining me tonight, Saturday February 24 at 7 pm, for the "International Mother's Day" celebration with the Ambassador of Bangladesh to the United States, the Honorable Mohammed Ziauddin and Mrs. Ziauddin, at the Gunston Arts Center Theater I, 2700 South Lang Street in Arlington.

Come Visit Us in Richmond!

Things are a little slower now than they were before Crossover.
So if you want to stop by and visit me in the Richmond office, please come on down! 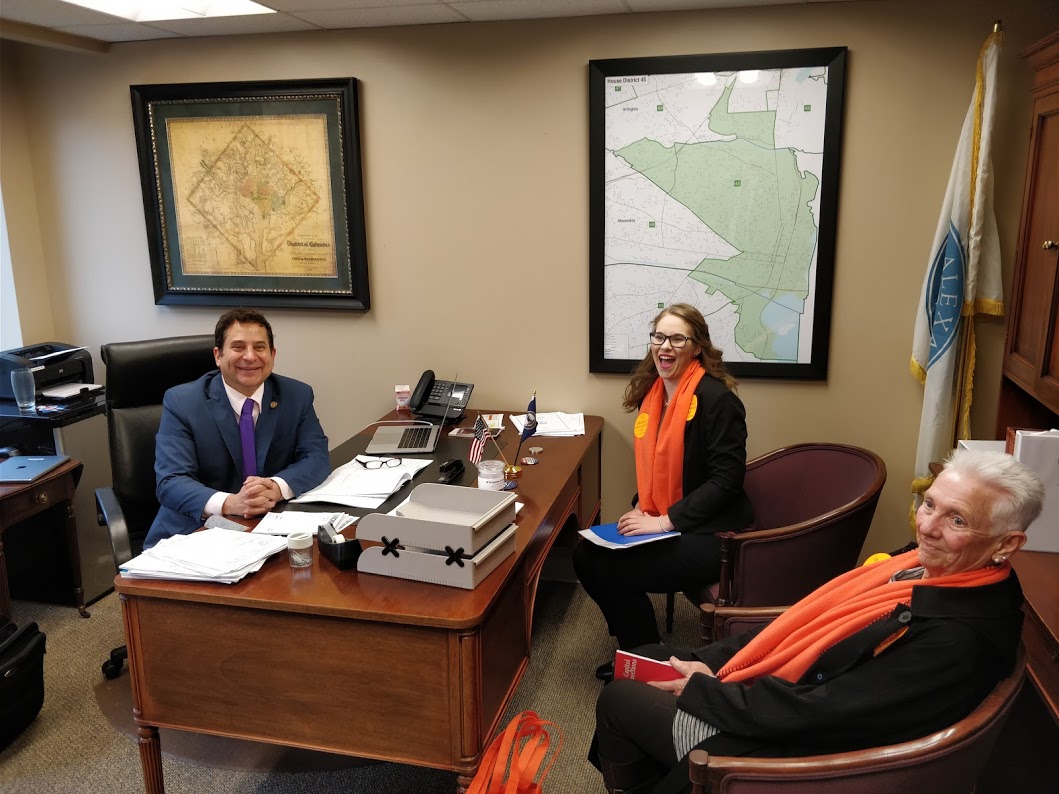 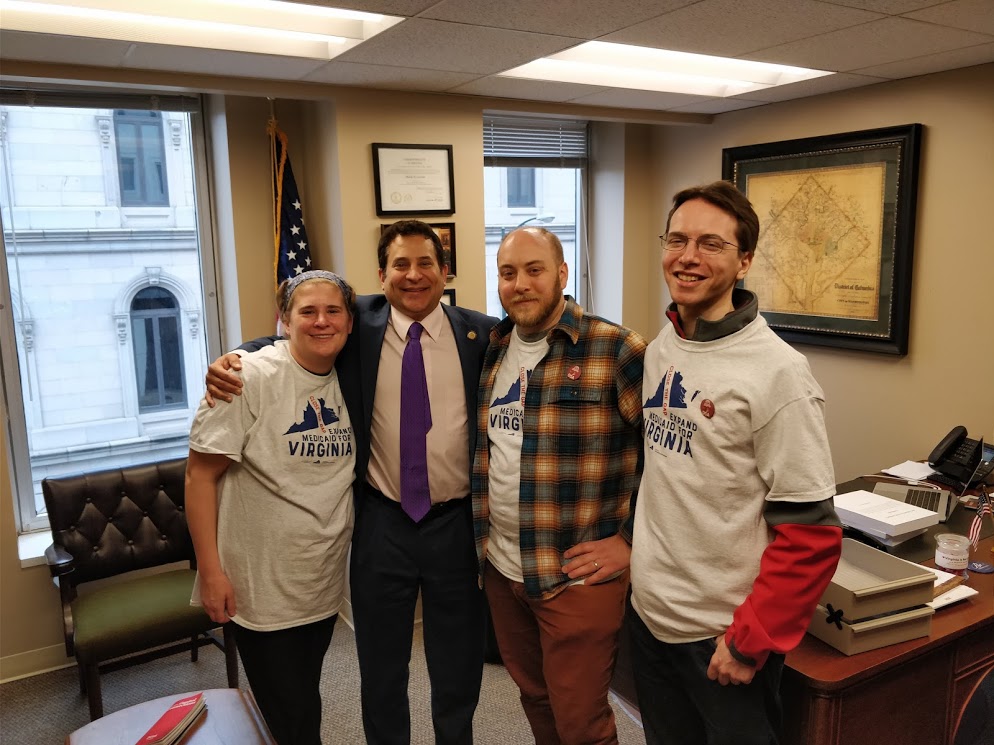 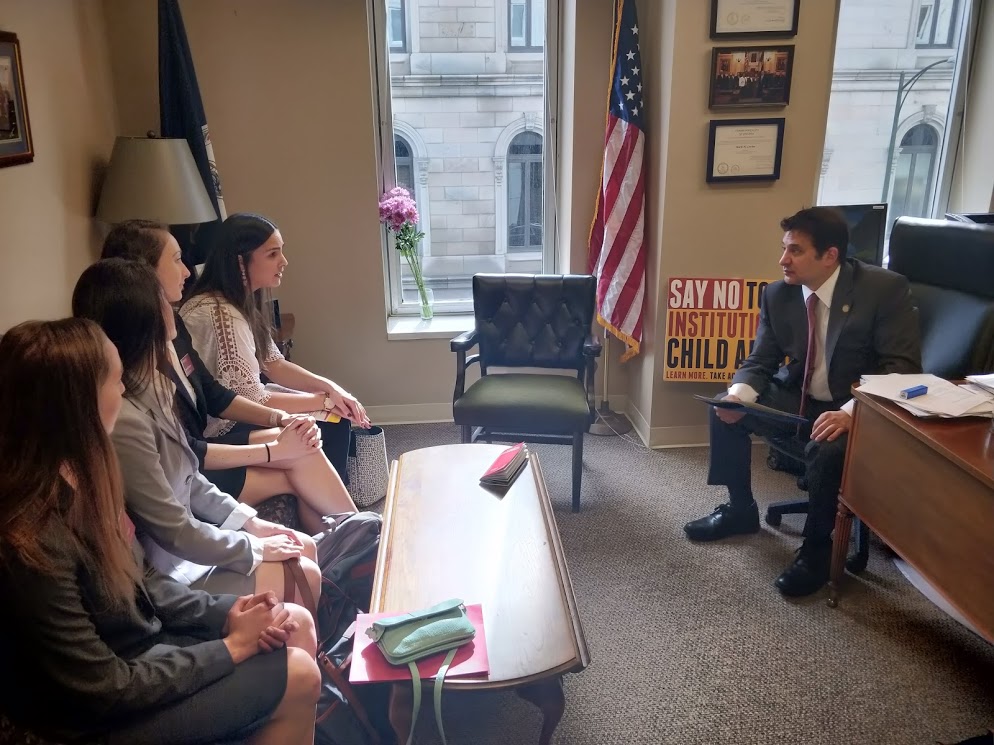 Virginia Academy of Nutrition and Dietetics